Learn about the birthstones for November: Topaz and Citrine stones

In this article we are focussing on both November birthstones - Topaz and Citrine.  The two are incredibly similar in construction and are often difficult to tell apart. They are both widely used in the jewellery industry and their beauty and sparkle are the reasons why. Topaz stone value is generally more expensive and comes in a wider variety of colours than the Citrines. Citrines on the other hand can be rarer to find. With both being so beautiful, it is difficult to pick a favourite. Let’s start first with the Topaz. Topaz is derived from the Greek ‘topazios’ which was the early name of St. Johns island in the Red Sea. It comes in a range of colours from light yellows, through oranges and reds, to blues and greens. The most valuable variety are the pink/red stones, known as the Imperial Topaz, a name gathered from its popularity among Russian Czars of the 18th and 19th century.

Topaz occurs in igneous rocks, forged by the pressure of volcanic activity, deep underground. This formation process means Topaz is one of the hardest minerals found in the natural world, with a hardness close to that of Diamonds and Rubies.

Currently, the largest faceted gemstone in the world is the “El-Dorado Topaz”.  This 31,000 carats Topaz gemstone was discovered in 1984 in Minas Gerais, Brazil, and weighs 6.2 kg. This position was previously held by the 21,005 carat Brazilian Princess Topaz of the American Museum of Natural History in New York, and later by the 22,892.5 carat American Golden Topaz, now based in the Natural History Museum in Washington DC. 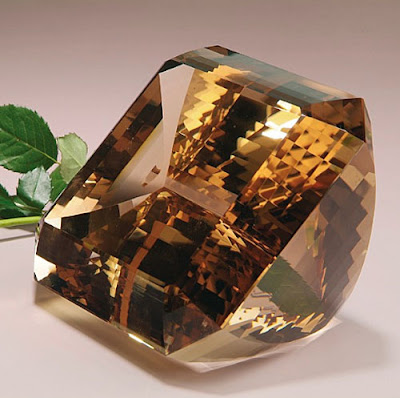 Blue Topaz stone colour is the most commonly used by crystal healers and in semi-precious jewellery. Naturally occurring blue Topaz is quite rare. The most common colours of untreated Topaz gems are pale yellow, brown and grey. Pastel shades of light-green, violet and pink are also found. Since these colours are rarely vivid, they are often treated to produce more exciting and intense hues.

Amongst Topaz meaning and properties, this gemstone is said to soothe, recharge and align the meridians of the body, directing energy to where it is needed most. It is also believed to bring joy, generosity, abundance and good health. It is known as a ‘lover of gold’ and good fortune. Citrine crystal is a variety of quartz with a striking yellowish-brown colour. Its name derives from the French word ‘citron’ meaning “lemon”, in a clear reference to the colour of the stone, which is caused by the presence of ferric iron.

The Citrines retain almost the same powers and benefits of the Topaz however, it is generally more affordable. That makes this semi-precious stone a great substitute for the pricey Topaz. Most Citrines mined come from Brazil, particularly the Southern state of Rio Grande do Sul.  Since naturally occurring Citrines are extremely rare, a great deal of the commercialised Citrines are actually heat treated Amethysts or Smoky Quartz. Such treated stones are generally more orange in colour than the pale yellow of their natural form.

Citrine meaning and properties are associated with light-heartedness and cheerfulness.  Its energy and bright colour are the reasons why this stone is associated with the sun. It is said to promote joy and enthusiasm in the wearer, which in turn creates prosperity in life. The stone drives out darkness and helps to protect against any source of negativity. According to ancient Chinese legend, this is “The Stone of Success,” and should be given to generous people only. Chinese emperors would often wear Citrine jewellery because they believed it would increase intellectual capabilities and broaden the mind. Another name for this gemstone is the “Merchant Stone” because of its association with wealth and prosperity.

Which one of these gemstones is your favourite? Are you a Topaz birthstone or a Citrine birthstone fan?

Browse through our Citrine pieces and our Topaz stone jewellery collection and see which designs suit you best.